Oakland Interfaith Gospel Choir | Kids Out and About San Francisco 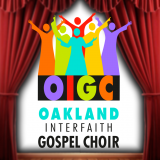 Address:
655 13th Street Ste 301
Oakland , CA , 94612
Phone: (510) 839-4361
37° 48' 19.7208" N, 122° 16' 35.796" W
See map: Google Maps
https://www.oigc.org/
admin@oigc.org
Contact name:
OIGC
Business/organization type:
Community group
Entertainer - misc
What our organization offers:
Live performances
Subjects / Categories:
Music
Voice / Chorus
Seasons in which we offer activities (select "All seasons" for all):
All seasons
Ages for which our activities are most appropriate:
All Ages
Adults & kids together
Adults without kids
Founded in 1986, OIGC's mission is to inspire joy and unity among all people through black gospel and spiritual music. Under the direction of the Emmy-winning Terrance Kelly, the Oakland Interfaith Gospel Choir brings together 55 singers and 4 instrumentalists who embody a community of diverse races, cultures, and faiths. They also share an uncontainable passion for music. Their mission is to inspire joy and unity among all people through black gospel and spiritual music. Judging by their audiences’ reactions—clapping, cheering, and singing along—it is apparent that they succeed in that mission. Founded in 1986, the Oakland Interfaith Gospel Choir was born out of a gospel music workshop led by the exuberant Terrance Kelly at Living Jazz’s Jazz Camp West. It became an independent non-profit organization in 1991, and since then, the award-winning Choir’s exquisite harmonies and stirring gospel repertoire have led to performances with a wide variety of esteemed groups, such as The Prince of Kosher Gospel – Joshua Nelson, The Five Blind Boys of Alabama, and the Duke Ellington Orchestra. The Choir also appears on Grammy-winning albums by Linda Rondstadt, MC Hammer, Tramaine Hawkins, and others. OIGC, once referred to as a “treasured Bay Area institution”, was named “Best Gospel Choir” in 2006 and was the winner in the “Best Church Music” category in 2009 in the East Bay Express Reader’s Polls. Terrance Kelly was awarded the Dr. Edwin Hawkins Excellence Award in 2013. To be certain, though, the best way to grasp the choir’s greatness is to hear them in person. A current public performance calendar can be found at www.oigc.org
Click For More Information